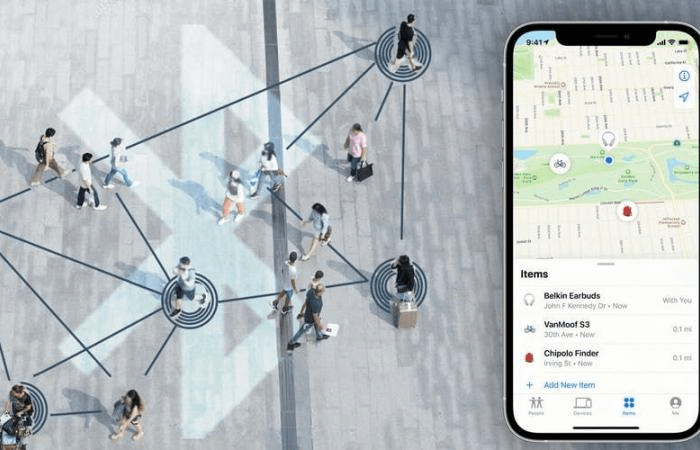 April 9, 2021:-On Wednesday, Apple announced that iPhones would soon be able to track lost items using a built-in app called Find My.

The first products that work with Find My will be released next week, Apple said. They include e-bikes from VanMoof, wireless earbuds from Belkin, and an item finder from Chipolo. These products will use other people’s Apple devices in a privacy-sensitive way to find the objects and show their location inside the Find My app on a map.

Find My was initially announced in the previous summer at Apple’s annual developer conference and builds on a service called Find My iPhone.

For Apple, the Find My app is a feature for its customers that adds to the iPhone’s value, and if it’s practical, it could make users less likely to switch to competing for Android devices.

In January 2020, Tile’s general counsel, Kirsten Daru, testified in front of a congressional hearing accusing Apple of using its market power to disadvantage its product and benefit its services, which also include adding pop-ups to iPhone software to which users will have to repeatedly agree to let Tile’s software operate in the background.

Tile also cited reports from analysts and media that pointed to Apple preparing its lost-item tracker hardware and commented that as Apple was reportedly working on that product, it started to hassle Tile by removing its products from Apple retail stores.

Apple did not agree with Tile’s arguments and said it would make changes to its iPhone software that allows Tile’s product to improve its work, such as letting it run in the background. It later announced the Find My program.

Apple’s Find My technology uses Apple devices’ Bluetooth wireless signals to create a network of devices looking out for lost items. On Wednesday, Apple said that the process is end-to-end encrypted and anonymous, now neither It nor the manufacturer of a Find My object will know where it is. Only the user and their iPhone see the place of the product.

It also said that it would release specifications so that accessory makers could use a new chip in recent iPhones using a different kind of wireless signal called ultra-wideband to track the lost objects.

Companies interested in building Find My products can participate in It’s authorized accessories program called MFi. It said that other companies would bring Find My-compatible products to market.