US Congress set to certify Joe Biden's victory amid protests. 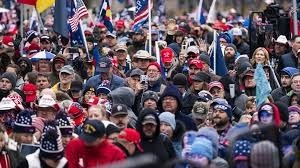 January 6, 2021:US lawmakers are set to meet on Wednesday to confirm Joe Biden’s victory in the presidential election between Trump supporters’ protests. A joint session of Congress will confirm electoral college votes.

Some Republicans are all set to fully support Donald Trump, to overturn the results by objecting at the session.

Hundreds of National Guard members are being mobilized.

Rallies against the certification of Mr. Trump have begun by his supporters in Washington DC. Counter protests are also expected.

Thousands of supporters of Mr. Trump, including some far-right activists, are expected to join the Washington protests.

On Tuesday, Mr. Trump tweeted that he would be speaking at the “Save America Rally” the following day.

He has refused to concede the November 3 election, repeatedly alleging fraud without providing any evidence.

He has also tried to throw doubt on the integrity of Tuesday’s senate run-off vote in the southern, traditionally Republican state of Georgia.

If the Democrats win both seats, they will have control of the Senate, which will help Mr. Biden push forward his agenda after being inaugurated as president on January 20.

Officials have warned Trump supporters not to carry guns.

Police on Monday arrested the far-right Proud Boys leader, charging him with the destruction of property related to a previous protest. Enrique Tarrio was later released, but a judge ordered him to stay out of Washington.

Washington DC’s mayor has requested the National Guard to assist local authorities. Officials say the troops will not be armed and will help with crowd management and traffic control.

PrevPreviousModerna CEO says the world will have to live with Covid ‘forever.’
NextCongress certifies Joe Biden’s victory after the deadly attack.Next