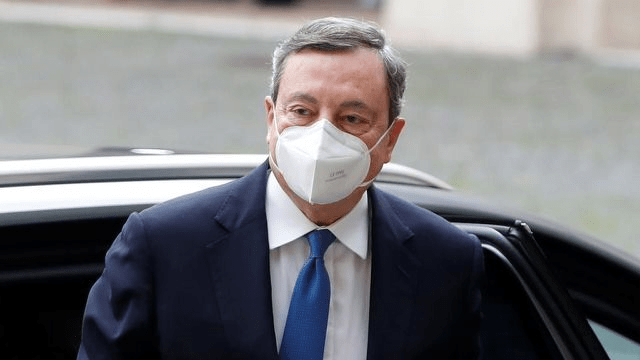 February 3, 2021: The former president of the ECB (European Central Bank), Mario Draghi, is due to meet Italy’s president, Sergio Mattarella, at lunchtime.

Draghi will be asked to form a technocratic government and solve Rome’s current political crisis over the last month.

On Wednesday, Nick Andrews, European analyst at Gavekal Research, said, “Say what you like about Mario Draghi, but he’s not one to shirk responsibility in a crisis.”

Italy’s recent political problems began when a small party stopped supporting the coalition government. This indicates that the pro-EU cabinet lost the required working majority in the Italian Parliament, which raised the prospect of a snap election at a time of severe health and economic crisis.

Mattarella consulted with the different political leaders to solve the problem. However, the negotiations have not yielded any working majority, and the country’s president is avoiding new elections.

According to the polls, the anti-immigration Lega party would win the most votes in an election and potentially form an alliance with the far-right Brothers of Italy party.

Draghi served as ECB president for eight years and was at the helm during one of the most critical moments in the eurozone history. The sovereign debt crisis threw light on how weak public finances were in certain countries, which sparked concerns that the 19-member region would break-up.

As issues raised, Draghi said in a speech in London in 2012 to reassure market players that the ECB would do “whatever it takes” to keep up with the eurozone’s stability.

His words made investors calm and effectively saved the euro area at the time. Draghi would then take the monetary policy to uncharted territory in the region, introducing negative interest rates and quantitative easing. Both policy instruments are still in place.

The possibility of Draghi becoming the new Italian prime minister has received well in financial markets.