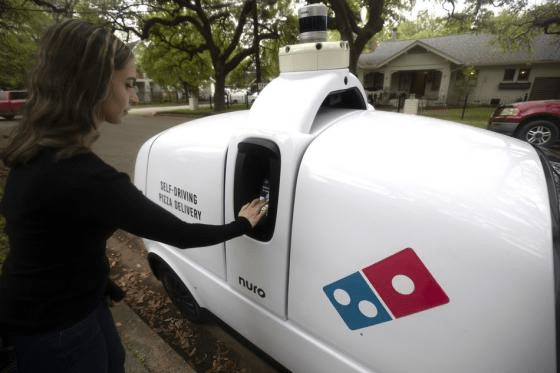 April 13, 2021: -Domino’s Pizza’s newest delivery driver isn’t a person; it’s a self-driving car. On Monday, the restaurant company said that an autonomous car made by Nuro would start delivering pizzas in Houston this week as part of a pilot program.

Customers should place a prepaid order on Domino’s website for delivery from the chain’s Woodland Heights location. If their order falls within the several days and times, they can choose to have Nuro’s R2 robot drop off their pizza. After the robot comes, customers will have to enter a PIN to open the doors so they can get their pizza.

A Domino’s spokeswoman said that the company doesn’t have an end date for the pilot program yet. The R2 robot is the first completely autonomous on-road delivery vehicle without any occupants to take regulatory approval from the U.S. Department of Transportation.

Nuro, founded by two former members of Google’s self-driving car team, introduced $500 million in its recent funding round, including an investment from Chipotle Mexican Grill.

After the last decade, Domino’s has invested in technology to order and receive a pizza much faster and easier and help it lure customers away from other chains, such as Papa John’s. Driverless pizza delivery is one area of recent focus. However, the company is still years away from replacing its entire fleet of drivers.

The company announced its partnership with Nuro in 2019. It researched how consumers would react to pizza delivery from an autonomous car with Ford two years before.

Domino’s shares have increased 13% in the previous year, giving it a market value of $15.2 billion. The company has benefitted from the desire of the customers for delivery in the coronavirus pandemic, but analysts are concerned about pizza fatigue in the coming months.